Why Symptoms in Animals Are Seldom Their Own

Scientists have found that what could be termed ‘a shocked response’ is registered in plants when a fly is killed in their vicinity. Further studies have shown that they recoil when in the presence of someone who viciously rips a plant to pieces, even months after the occurrence. This and more is documented in The Secret Life of Plants, by Peter Tompkins and Christopher Bird.

Animals are likewise empathically bonded to those who are regularly in their vicinity. In treating an animal’s symptoms, they cannot be divorced from the consideration of unresolved issues or pathology in the lives of their caregivers.

The conclusion is simple. If you want your animals to thrive, they need to be in the presence of life- enhancing attitudes and emotions. Shallow, unexamined lives of those who refuse to have fruitful experiences that yield insights produce walled up tumors. If this does not happen in themselves, it could occur in the empaths that love them – their animals.

If the owner feels victimized, animals become prone to injury or attacks by other animals. The rage or boredom of an owner can be heard in the bark of his dog. His resistance to life and his environment will produce an acidic body pH, not only in the owner but in his pet. This is a fertile environment for arthritic and other disease symptoms.

Let us therefore examine the language of pain in ourselves before it manifests in the innocent creatures around us. In clearing our lives of that which no longer serves, let us assist them to maintain the purity of their bodily systems that is their natural state. At all times, just as we would with our children, let us give responsible consideration to the choice of those entrusted with the care of the animals we love.

The Language of Pain

The following list of body parts and symptoms will assist in recognizing areas that are out of balance:

The breath is expressing our life force, so asthma patients have life force problems.

Fluids have to do with emotions. Blood, in particular, is the equivalent of love. Hardened arteries mean hardened emotions. The heart has to do with giving love. The energy we give is drawn from the limitless supply of the universe and is supposed to enter our body through the crown chakra. If we close our heart because of fear, or not being fully present in our body, we begin to give energy from our lifeforce center, depleting us.

To insulate from this drain of energy, a layer of fat could build up around the solar plexus. Lightworkers frequently have this layer of fat as an attempt to protect their energy source.

Soft tissues and ligaments reflect attitudes. The joints have to do with how flexible we are. The soft tissues control the joints, so they are affected too.

Skin reflects how we interface with the world. When skin is irritated, it is because we perceive the world as abrasive or hostile. A boil means that a specific area of our life is like a sore.

Bones indicate what was inherited from parents and ancestors or from genetic memory and early social conditioning.

A virus is the result of invasion. Boundaries have broken down. We honor our animal friends by establishing healthy boundaries and maintaining them. Viruses invade when our sub-personalities aren’t healthy, happy, whole and functioning.

Fungus can develop when the animal is or feels abandoned, bacteria invade when deliberate hostile influences breach established boundaries.

The head signals thoughts and ideals, the way we think life ought to be. The face has to do with what is presented to the world. If the presentation is different from the real identity, acne may develop. Negative thoughts, resentments, feelings of inadequacy can produce mucus in the sinuses. Phlegm, the fluid in the throat, is also indicative of negative emotions. Headaches often result from suppression of memories, or a conflict between the left and right brains.

Ear problems can mean there are things in the environment they don’t wish to hear.

The thyroid is where we suppress anger at not being heard. If there are pieces of our reality that don’t fit, and we try to ignore them, it affects the thyroid.

Teeth and their roots are connected to bones and problems indicate conflicts with authority figures or societal attitudes. They also pertain to the need for aggression. Problems with gums indicate there is something in life that is difficult to swallow; it becomes stuck and bothersome, resulting in an abcess in the mouth.

The neck is where thoughts and ideals meet, reflecting the way life is for us. Atlas problems mean the head isn’t on straight and arises from conflict between the ideal and reality.

Shoulders, arms and hands reflect that which is done to us or what is being done to others. Hands represent the present moment; arms, that the problem is less obvious or under the surface; shoulders, that we are trying to push it into the past. Hurt feelings manifest in the fingers.

Below the shoulders and to the hips is the area to do with desires, passion and our self-expression of things we love to do.

The hip is the balance between the way we want to live and how we are actually living.

The pubis bone locks when sexuality is drained.

Sexual organs relate to the ability to be active in reproduction.

Legs reflect how we are moving through life.

Knees reflect flexibility around what is happening to us. 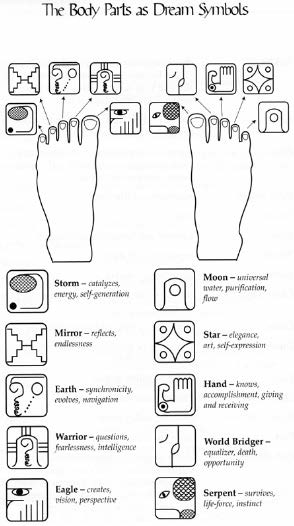